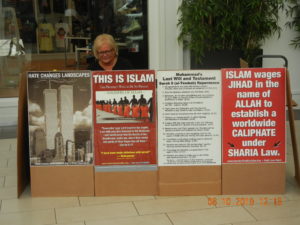 The Counter Jihad Coalition had a great “Public Outreach” event yesterday. Thanks go out to Diane for joining me yesterday on educating the public. Together we passed out almost 1,000 brochures with the truth on Islam into the hands of people. We saw a much higher than normal number of Muslims passing our booth. We passed out to them the brochures we have addressing Muslims. Normally what happens is they return several minutes later and throw it at us or tear them up and litter the floor. Yesterday that did not happen. Perhaps they threw them in the trash can or maybe even possibly they kept them and did some thinking about the meaning. We also had a higher than normal number of irate Muslims. Why is it that followers of this “Religion of Peace” like to scream at us with profanities ? A few kept their mouth shut and just gave us the middle finger salute. One male who identified himself as a Christian was yelling and shouting at us that we were haters and racists. He just could believe we would spread such hate and of course he did not want to hear anything from us as to what we were trying to do. He finally left when he found out that his outbursts were not going to get us to pack up and leave.

On the positive side we had many good conversations. One lady and her son came up and asked us what we were doing. I spent a few minutes with them, then Diane took over and had a good 20 minute conversation with both of them. They really wanted to know more about Islam. And thanked Diane for all her information by the time they left. Many other short conversations took place similar to this one throughout the day.

It was again another good day for the Kafir. Please come on out with us sometime and you will get a good feel for the level of knowledge people have on Islam and be able to see some of these followers of the “Religion of Peace” in action.

I will post a picture from yesterday on our website, please take a look at www.CounterJihadCoalition.org . And let your friends know that all of our factual brochures can be downloaded at no cost. We can also always use a donation to help offset the cost of printing up the brochures. Help us push back on this Islamo-Facist machine which is in high gear. Again thanks to Diane for coming on out.