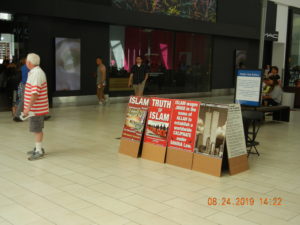 We had a terrific Public Outreach today in Los Angeles. We were at our favorite venue but assigned to a different location than the one we like. In some respects it was like we were at a different venue, I’ll explain in a minute. Thanks to Maria and Jim for coming on out today. We passed out around 800 brochures by the time we packed up our booth for the day. So a little less than what we usually do at this venue, but we were in a different spot. The foot traffic seemed to be a little lower than usual, but the number of Muslims was way more than usual. We started getting pushback from Muslims before we were even open for business. As I was placing our brochures on the table, one Muslim came up and after looking at our posters shouted this is all B___ S___t. It is all lies, how can they let you spread hate and lies. He wouldn’t listen to anything I had to say. Shortly after he left a couple of Muslimas came walking by with their makeshift burqas so I handed them our brochure entitled, “Muslims are shackled by Sharia Law ….Set yourself Free!”. They were reading it as they walked off until that obnoxious Muslim went up and started talking to them. Shortly thereafter they both came back and threw the brochures onto our table and left. The Muslim male kept hanging around our booth for a couple of hours. Nothing happened by the time he left as there were two mall security guards along with a Sheriff Deputy close by. Some people even shouted why are you spreading such hate? The one Muslim that took the prize came up shouting this is BS I am a Muslim and I know this not to be true. He was complaining about our poster which has the 21 Coptics being beheaded on the Mediterranean Sea by member of the Islamic State. I told him it was fact, it happened. I showed him our poster of Surah 9 and verse 5. No that is not true the Quran does not say such stuff. At which I opened my Quran and let him read verse 5 out loud. No not true this has not been translated properly at which I pointed out that it is Yousef Ali translation and approved by Al-Azar University. He started shouting no, no ,no as he walked away.

We did receive a few compliments from people very appreciative of us passing out the truth, some knowledgeable on Islam. Just as we were starting to pack up, a lady came up and at first did not know which side we were on with Islam. We explained to her what we were doing and wow did she open up with us. Turns out she is an attorney and goes to a Calvary Chapel. She was so glad to see people exercising their first amendment and speaking the truth on Islam. So a good way to end the day.

I will post a picture on our website shortly so stop by and take a look. Remember all of our brochures are free to download. Just go to our website, www.CounterJihadCoalition.org and click on the trifold brochure button. We can use your help in spreading the truth. So if you can let me know you would like to come on out with us on a Public Outreach. And we can always use some financial donations to help offset the cost of printing up the brochures.

Thanks again to Maria and Jim for coming out today and educating many people.