You are here: Home / Uncategorized / Muslims Use Difference as a Power Play 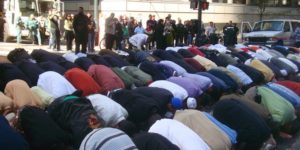 Muslims Use Difference as a Power Ploy

For nearly 250 years, the United States has been a thriving mélange of different races, cultures, and religions. Since the 1960’s equal access opportunities have not only been legislated, but they have been embraced by society. The keys to social and economic success were assimilation and embracing the uniquely “American” values expressed in the nation’s Declaration of Independence — that all men are created equal and endowed with certain inalienable rights — and the original national motto — “E Pluribus Unum.” Immigrants shed their accents and old country cultures to avoid discrimination based on those differences. While there were still “Chinatowns” and “Little Italy’s,” the path to success was to break out of those cultural ghettos as quickly as possible.

Today, identity is the key to power. The more “intersections” one has with under-class groups the greater one’s power in the public forum. No group has exploited this “difference” more than American Muslims. They refuse to assimilate, and then claim to be victims of discrimination. They insist on the other accommodating them – by providing prayer space in public buildings, by serving only halal food, by designating a special “Muslim Day” when no such accommodations are designated for other religions.

The origin of this grievance-based power for Muslims dates back to their very first armed attack against non-Muslims – the raid on Nakhla in 624 AD. Muslims had recently migrated to Medina and were in dire need of “spoils” to sustain their small group. A raiding party was sent after a caravan passing through Nakhla, but it attacked the caravan during the “sacred month” when, by Arabian custom, all travelers were protected from attack. At first Muhammad denounced the raid, but later he received a verse to justify the action — Quran Surah 2:217 — that opposition to Islam [idolatry] was worse than killing. This precedent was later made into a general pronouncement that Muhammad was under no obligation to idolaters (Quran Surah 9:3) and that Muslims should slay them wherever they found them (Quran Surah 9:5).

Islamic Sharia Law has made non-assimilation a key requirement for Muslims migrating to non-Muslim lands. Reliance of the Traveler, Section w43.5(c), states, “it is clear that there is virtually no country on the face of the earth where a Muslim has an excuse to behave differently than he would in an Islamic country, whether in his commercial or other dealings.”   If a Muslim is required by “manmade” law to violate Sharia Law, for example having to buy auto insurance or having a photo I.D., it is the “moral responsibility of the lawmakers, not the person forced to comply.” (w42.4)

How have Muslims used their “difference” to accomplish political ends? Here are a few examples:

Sensitivity Training – One of the common remedies for offending Muslims is requiring sensitivity training for the people involved. This is a ploy for imposing Sharia Law requirements on non-Muslims. An example of this is a Dearborn Michigan Home Depot store, where employees underwent “Muslim cultural awareness sensitivity training” administered by the Muslim Brotherhood Council on American Islamic Relations (CAIR) in September, 2014. Employees were walked through a pamphlet titled, “An Employer’s Guide to Islamic Religious Practices.”   This guide asserts the Muslims’ “religiously mandated” practices such as taking time off for five daily prayers, hour-long Friday Prayers, fasting, and a 10 – 21 day Pilgrimage to Mecca. Employers were told to relax dress code requirements and exempt Muslims from handling prohibited items like alcohol and pork products. Also Muslims should be excused from shaking hands with people of the opposite sex, making eye contact when talking, or participating in office social events of other faiths or where alcohol is served.

Other institutions that were subjected to Muslim Sensitivity Training include Immigration and Customs Enforcement officers and supervisors (CBP’s counterparts) in Chicago, all freshman students at Ohio State University, teachers in Philadelphia’s public school system, the Lilburn (Georgia) Police Department, the 45,000 officers in the Transportation Security Administration (TAS). To the extent that these training activities took place at government expense or on government facilities, they were a violation of the Establishment Clause of the First Amendment.

Building Code Violations – Several American cities have been sued by Muslims when their mosque building plans have been rejected for non-compliance with building codes. These lawsuits can bankrupt a small town, so the leaders are often forced to give in to the Muslim demands. Recent examples include Des Plaines Illinois, Sterling Heights Michigan, Troy Michigan, Bayonne New Jersey, Bridgewater New Jersey, and Bensalem Pennsylvania. The settlement with Bridgewater (population 45,000), for example, cost the city $7 million. The building code violations involve inadequate parking, excessive traffic, nighttime activities in residential areas, etc. The code were established to protect property values, but Muslims accused the cities of religious discrimination which won easy support in federal courts.

Muslim Days — No other religion insists on a special day each year to honor their religion.   On April 13, 2015, the Islamic Circle of North America tried to establish a National Muslim Advocacy Day in Washington, D.C. While that effort fell flat, there are now “Muslim Days” at the state capitols in California, Ohio, Oklahoma, Minnesota, and Texas. Thousands of Muslims meet with elected representatives to advocate for their parochial agenda. There is also a World Hijab Day (February 1) and Muslim Women’s Day (March 27) – all to bring attention to the Muslims’ refusal to assimilate.

Public School Indoctrination — In 1975 representatives of Saudi Arabia entered into a $6.4 million contract with the Stanford Research Institute to determine how to change Americans’ perception of Islam. SRI determined this was best accomplished by re-writing history in elementary and high school textbooks. The first step, however, would be to flood academia with pro-Islam doctorate dissertations on issues touching on Islam – the spread of Islam, the Holocaust (and its Islamic origins), Israel, Palestine, etc. This could only be accomplished by sympathetic Middle East Studies departments in major universities in the U.S. So the long process began with Saudi Arabia granting large endowments to U.S. universities, including UCLA, UC Berkeley, Cornell, Harvard, Georgetown, Princeton, etc. Harvard, for example, got over $20 million. Armed with these biased resources in the form of “vetted” dissertations and books, think tanks like the Council for Islamic Education worked hand-in-hand with publishers to tweak the textbooks to shine favorable light on Islam. (See: http://www.actforamerica92691.org/resources/ISLAM_In_America$27s_Classrooms_ver_1.54b.pdf ) Meanwhile, numerous Middle Eastern countries sponsored fellowships for American teachers to visit Middle Eastern countries as guests of specially-guided tours to show Islam in the most favorable light. In all these situations Islam is conflated with Muslims, so the focus is on the plight of the people instead of the evils of the ideology.

The result is that most of the textbooks used in the United States have a distorted view of Islam and historical events related to Islam and the Middle East. It will take decades of concerted effort to remedy these textbooks.

Here are just a few of the distorted statements found in California textbooks with regard to Islamic ideology and history: Missionary work involves finding common ground with other religions; Muslim Arabs introduced a “golden age” in Spain; Crusades were the cause of Muslim-Christian animosity; Allahu akbar means God is great; Muslim pray three times a day; Muhammad allowed all faiths to worship freely in Medina; Allah is the same god worshiped by Jews and Christians; Muhammad’s message was one of equality; Jihad is for defense and righting wrongs; a hadith reflects the “Golden Rule”; Zoroastrianism was the first major religion that obeyed a single god; Islam was not “spread by the sword;” the Quran is the source of Sharia Law; music and literature thrived in Islamic empires; Quran gave women equality with men and more rights to education; Enslaved people from West Africa were usually criminals or war captives; Europeans were the first to sell slaves in other countries in the late 1400’s.

Censorship in the Media and Commerce – The First Amendment prohibits the government from ‘abridging the freedom of speech, or of the press.” Today, however, most communication in the U.S. is over the internet through websites and social media, and that is becoming more and more censored. Controversial scholars and pundits (e.g. Dennis Prager and Tommy Robinson) are banned from YouTube and Facebook. Ayaan Hirsi Ali was denied an honorary degree and speaking engagement at Brandeis University.   Amazon refuses to sell Tommy Robinson’s commentary on the Quran. CAIR has asked Amazon to remove all bathmats and door mats with Arabic or calligraphic writing from its stores to prevent any possible offense to Muslims.

Inverting E Pluribus Unum — Instead of embracing a common heritage and values, Muslims are capitalizing on distinguishing themselves from other Americans by their dress, by their primitive customs, and their disdain for all that is not Islam. By doing so, they create their own minority group with its special grievances and demand for prerogatives. History has shown that such determined intolerance wears on the host country. After Spain was liberated in 1492, it took only 70 years for the Moors to be banished from the country. The United States has already restricted immigration from five Muslim countries which are unable to vouch for its people. The Visegrád Four, an alliance of four Central European states – the Czech Republic, Hungary, Poland and Slovakia – have agreed to severely restrict immigration from Muslim-majority countries. China’s response to Islamic separatism and terrorism has been to put militant Muslims into re-education camps. Hopefully, such harsh measures will not be necessary here.