You are here: Home / Uncategorized / The Roots of Political Islam and Terrorism 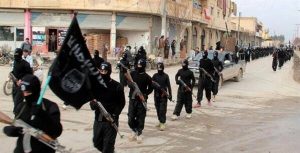 Its Hardly a day goes by without hearing about a car bomb attack, machine guns or an explosive belt to create as many casualties as possible while shouting Allahu Akbar ! . So What is the nature of al-Qaeda or ISIS and their doctrinal , and what do they exactly want?

In my world, Most of the Arab writers are hypocrites and dare not to speak the truth that would threaten Innocent people’s lives . The history of Islam is full of massacres, torture and murder, even among the first followers of Islam themselves and Muhammad unlike what Muslims claim .

in Islam its knowledgeable that Muhammad ordered the assassination of all the anti-Qur’an poets and those who stood against him .

political Islam groups – including the Muslim Brotherhood – initiate political assassination, as Mohammed himself had exercised it against his opponents. the first history of Islam is full of Political Assassinations .

But after Mohammed’s emigration to Yathrib ” Medina” and his success in persuading it’s tribes by Islam , he formed a military base and set out from there, conquering the Arab tribes and subjecting them to Islam with the sword (Islam – Jizyah – War) , And his followers were tempted by the women and the looted money (from the killing of the Non-Muslims), and in this way Mohammed Invaded most of the Arab peninsula .

Isis, Al-Qaeda, the Taliban, Boko Haram, Hamas, the Muslim Brotherhood, the Salafists, the Jihadists and the Somali Shabaab Movement. They all read Muhammad’s biography well and know the role of the invasions and the armed forces in subjugating others to their beliefs. Therefore, all the terrorist acts are based on Muhammad’s Biography and the verses of Quran .

The Attempts to beautify Islam by characterizing terrorist groups as hard-line Takfiri, and that moderate Islam is a tolerant religion that urges science and development is funny. The nature of Islam is Radical . Consider what Muhammad says in the Violent verses of Quran .

Any Secret reader of the history of Mohammed sees two faced person, Muhammad in Mecca when he was a minority promoted peace by Imposing Taqqyah and on the other hand, Mohammed in Medina a murderer who slaughtered, cut off heads, issued signs of murder and persecution of non-Muslims,and took their money , their women , their children until they Submit to Islam after he became a majority .

But why have the Terror and killing escalated in Iraq, Yemen, Pakistan and Afghanistan, and head-to-head operations have increased in Syria and before in Algeria in the 1990s? Where do these people came from?

in the Modern world the first emergence of political Islam began in 1928 by the Muslim Brotherhood Among the objectives of this group was the siege of the Arab mind by spreading Radicalism and promoting terrorism , spreading myths, suppressing the freedom of opinion and expression and assassinating writers and thinkers. the Muslim brotherhood promotes a slogan that “Islam is the Solution”.

Islam was the solution to counter the Democratic Revolutions. Saudi Arabia and the oil countries participated in financing the phenomenon of political Islam as Islamic ideology enabled Arab monarchs in the oil rich countries to retain power. Away from democracy and accountability.

Thousands of mosques have been built to influence the ordinary and the public and to pray for the Jihadi Terrorism in Afghanistan. The Islamists had a victorious party in Afghanistan. They were pushing the Arab street for power, and Algeria was the first victim of Islamic terrorism.

Then the Political Islam emerged from that victory with large masses who believed in the slogan of Islam is the solution, and used their power in the street to enter the elections to win power, as happened in Egypt, Tunisia, and Yemen .

But political Islam is not one. From the Muslim Brotherhood’s criminal brethren, dozens of Salafist jihadist Terror groups.

the Muslim Brotherhood can use violence or Taqqyiah if they are a minority they use Taqqyiah then after dominance they use violence copying the biography of Mohammed as he did in the Arab peninsula .

The West rejected the logic of the Islamists and America hit a drug factory in Sudan because it was one of bin Laden’s investments. bin Laden made a terror attack in Nairobi and Dar es Salaam. America responded with the bombing of Afghanistan, then bin Laden created the events of September 11 in 2001 .

the Republicans and conservatives in America have declared war on terror, invading Afghanistan and Iraq, but failing to eliminate them.

After the failure of the Republicans in the war against Islamic terrorism, the Democrats in 2008 went into alliance with the political Islam as their own friend and they supported the rise of the Muslim Brotherhood in Egypt, Tunisia, Yemen and other countries. The strategy has become to give power to the Muslim Brotherhood, while they will take care to confront the jihadist Salafi.

The attempt of the Wahhabi Saudi Arabia to fight Islamic terrorism as they always promote that terrorism has no religion and that Islam is not responsible for terrorism is a failed attempt. The books of Islam which were printed and distributed by millions of copies in the past are still on the shelves of their libraries.The doctrine of Islam itself is the main source of terrorism and to combat this terrorism must be intensified efforts of the non Muslim World to dismantle this doctrine, which has become one of the most serious threats to security and peace,in the local, regional and the international Arena !