You are here: Home / Uncategorized / Why Is Islamic Justice Spelled S.H.A.R.I.A. ? 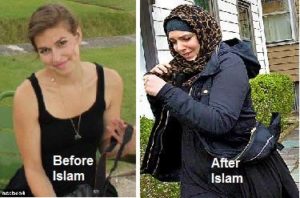 On November 10, the Muslim Public Affairs Council will be holding its annual convention in Long Beach. The theme of this conference is “Advancing America toward Justice.” The conference announcement claims that speakers will address the roots of the issues that led to “marginalization of vulnerable communities.” America has a sad history of marginalizing certain communities by race and gender – denying full privileges to African-Americans, Chinese, and women. Today, any discrimination based on race or gender is not only illegal but abhorrent to Americans, who embrace the concept of “e pluribus unum.” Thankfully, most of that marginalization is behind us.

But what about communities that choose to marginalize themselves from the American melting pot by embracing codes of behavior and dress that signal their rejection of the formative American concepts liberty and equality?   Is it incumbent on Americans to tolerate these rebels in our midst? Does the majority have to adapt to the minority, or should it be – as it has always been – the other way around? Are we obliged to tolerate intolerant communities?

When Islamic leaders talk about “justice,” they actually mean Sharia Law, which is claimed to be superior to the U.S. Constitution and the laws derived from it. Omar Ahmed, the founder of the Council of American Islamic Relations (CAIR) once said, “Islam isn’t in America to be equal to any other faith, but to become dominant. The Koran is the highest authority in America, and Islam is the only accepted religion on earth.” Despite the fact that Sharia Law contradicts many American laws and requirements, the most popular Sharia Law manual stipulates that “there is virtually no country on the face of the earth where a Muslim has an excuse to behave differently than he would in an Islamic country.” (w43.5) So when a Muslim is required to have a photo on his/her passport or driver’s license, “the authorities are responsible for the sin, not the individual forced to comply.” (w50.4) Note: All references are to ‘Umdat al-Salik (Reliance of the Traveller), a Classic Manual of Islamic Sacred Law, approved by Al-Azhar University (Cairo) and the International Institute of Islamic Thought (Herndon, VA).

Is there Justice in Islamic Sharia Law?

The question that really needs to be discussed at the MPAC Convention is, “Does Sharia Law achieve “justice” as understood in the 21st Century?” Let’s look a few examples:

Female Genital Mutilation (FGM): Is it “justice” to deny women the right to sexual fulfillment (e4.3)?

Inheritance: Is it “justice” for a woman to inherit one–half of a man’s share?

Judicial discrimination: Is it “justice” for a judge to discriminate on the basis of religion when hearing cases (o22.12) and when awarding damages (o4.9)?

All of these Sharia provisions are against the civil laws of the United States because they deny justice to the parties involved. It’s a safe bet that none of these Sharia laws will be discussed at the MPAC Conference.

Instead, the Islamic leaders will highlight their perceived Islamic Injustices, which could be described as “the three B’s.” Blasphemy, Bullying, and Banning Consideration of Sharia Law in Courts.

Blasphemy – Sharia Law states that saying anything negative about Islam or a Muslim – even if true – is forbidden. “The talebearer will not enter paradise.” “All of the Muslim is inviolable to his fellow Muslim: his reputation, his property, his blood” (r2.6). To revile the religion of Islam is an act of apostasy, punishable by death (o8.7(16)). Unfortunately for Muslims, freedom of speech (and the press) is guaranteed by the First Amendment of the U.S. Constitution. This freedom takes as a given that polite speech would need no legal protection. So it is speech that challenges ideas, behavior, and ideologies that is protected. This is an area where Islamists will try in vain to establish their view of justice in the United States.

Bullying — “Bullying” is a loaded term much like “racist.” The kind of bullying most of us think of is where bigger kids pick on smaller kids to show their power over them. They steal their lunch or their personal items. They throw their shoes over power lines, etc. It’s mostly about power. What Islamists are trying to sweep into this category is the natural tendency of kids to call out non-conforming behavior. You don’t wear socks with sandals; you don’t wear red socks with a blue outfit; you don’t wear your shirt backward, etc. All of this does little harm, and it helps improve the cohesion of classmates and friendship groups. So when young children are forced by their parents to wear hijabs, their classmates are naturally going to ask, “Why are you wearing THAT?” The Muslim children feel different and marginalized because they are clearly “non-conforming.” Naturally, they go home and complain that they are losing friends at school because they are forced to wear a hijab. To fight against this, the parents want to outlaw “bullying,” so classmates cannot call out non-conforming behavior. Discrimination regarding things that people cannot change is wrong, but discrimination about choices that make people look odd is a natural phenomenon. Muslims will just have to get used to this if they insist on dressing and grooming differently from the other members of the community.

Banning Consideration of Sharia Law in Courts — Some Muslims consider it an injustice that courts will not consider Sharia Law in inheritance disputes, in awarding custody of children, and in adjudicating domestic violence. Twelve U.S. states have passed legislation requiring “American Laws for American Courts.” When Islamists tried to legalize Sharia Courts in Ontario, Canada, in 2003, it was the Muslim organization — Canadian Council of Muslim Women – that lobbied successfully against the propose law. While Islamists insist that Sharia Law should be applied in Muslim cases, the U.S. Constitution states quite clearly in Article 6 that it is the “supreme Law of the Land.”

If Muslims want to achieve some sort of justice in the United States, their attention should be turned first to abandoning Sharia Law and embracing the just and equitable laws of the United States.