You are here: Home / Uncategorized / CJC’s Public Outreach Today was Busy and Productive 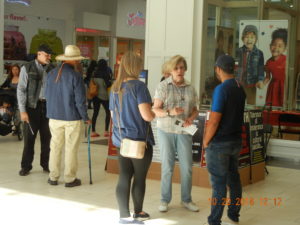 We had a great day today educating people on the facts of Islam.  Thanks go out to Linda, Diane and Pastor J for coming on out and educating the crowd.  At the end of the day we had passed out close to 1,000 brochures and had several good conversations with the people.  Linda and Pastor J had an interesting encounter right at the start, when a young Muslim came walking by our booth.  As he walked by, he shouted at them you’re infidels, infidels, white devils.  Linda responded you’re right we are infidels.  Linda had another encounter with a young Muslim man and his female Christian companion.  Their concern was that by doing what we were doing, WE are creating division and fear.  Linda responded saying we are opposing Islamic ideology and Sharia as advocated by Islamic leaders.  He said he rejects Islamic leaders and has his own interpretation of the Quran.  Wonderful Linda responded, but the thousands upon thousands who go to Mosque on Fridays don’t share your views.  But why blame 911 on Muslims, he countered.  Maybe because all 19 hijackers were following Islamic ideology???

Diane had an interesting encounter with an atheist who wondered what we were doing.  She responded educating the public on the truth and facts of Islam.  He couldn’t figure out why we would spend our time talking religion.  Ah said Diane you should read as only 16% of the Islamic doctrine is about religion.  They other 84% is political.  It is a complete way of life, not a religion.

Today turned out to be a peaceful one.  With four security guards and a Sheriff’s deputy close by we were not attacked by any of those followers of the religion of peace.